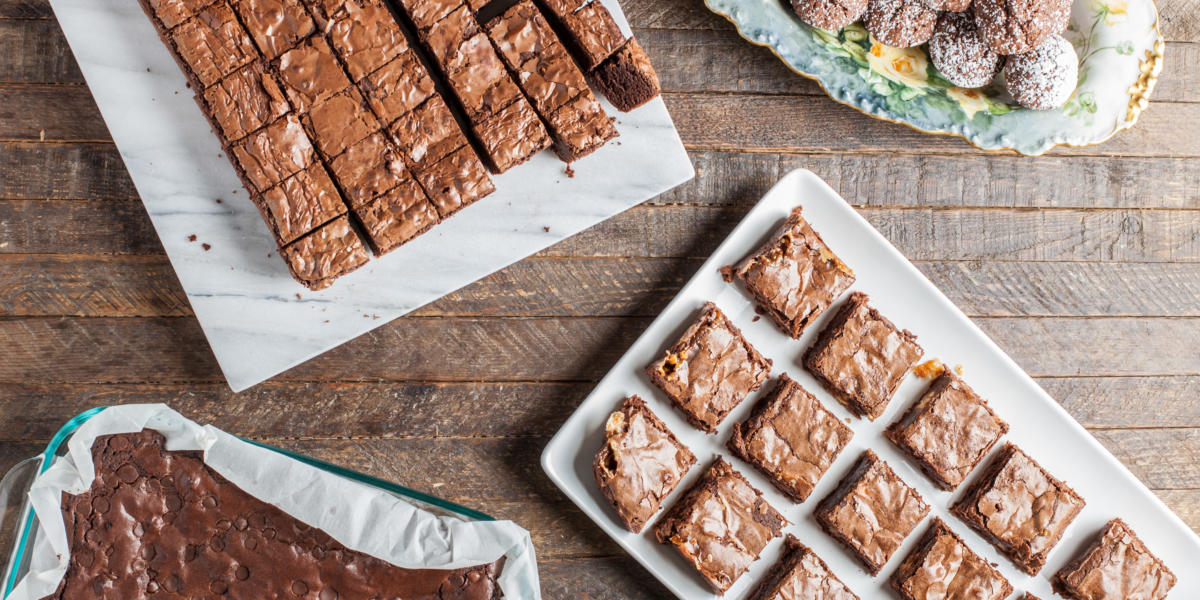 We had so much fun eating brownies for lunch last year that we decided to do it again! This year, five competitors faced off in one of our favorite office contests, a good old-fashioned brownie bake-off.

Because seriously, anytime you have a work-mandated excuse to eat a plateful of brownies in one sitting…now THAT'S a good day.

But first, a little back story on brownies. The earliest printed recipe for brownies appeared in the Boston Cooking-School Cookbook 1896, created by a woman named Fannie Farmer, who was well known cook and lecturer on food and nutrition. (And yes, the inspiration for the Fanny Farmer chocolate brand years later.)

The first recipe called for molasses instead of chocolate, and the brownies were baked in individual molds. In 1906, the recipe was updated with chocolate swapped in for molasses – and Americans discovered a new favorite dessert!

Fudgy brownies have a minimum amount of flour and no leavening (such as baking powder).

Cakelike brownies are just like they sound – like little cakes. With less butter and more flour than fudgy brownies, along with the addition of baking powder, they bake up softer and lighter.

Chewy brownies are made with extra eggs and a combination of different types of chocolate, creating a nice, chewy texture.

Blondies aren't made with chocolate at all; instead, they're butterscotch bars made with brown sugar, butter, and eggs.

The five brownie recipes in our bakeoff definitely fell in the chewy, fudgy category – and not a blondie in sight! After stuffing our faces with delicious, chocolaty goodness, it all came down to a vote.

And in first place: Lindsey's aptly-named Best Ever Brownies, from Gemma's Bigger Bolder Baking. Dark, moist, and studded with plenty of chocolate chips, these extra-rich brownies were a chocolate lover's dream. Check out the recipe and try it for yourself!