600 Crêpes: Tales of a Pastry Intern 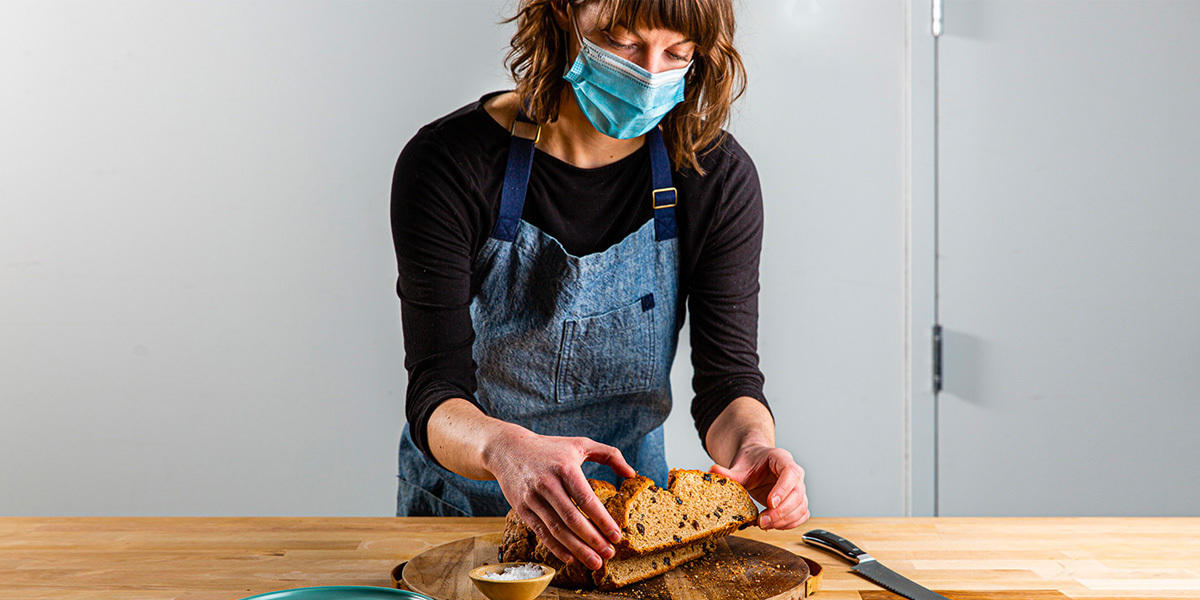 Content producer Elsa Goldman is an MVP on our kitchen team, in charge of developing, cooking, and styling recipes for a variety of clients. From foolproof pie crust to DIY Oreos to homemade dog biscuits, she’s pretty much seen it all — but she wanted to take her expertise to the next level. In the fall of 2020, she entered the Pastry and Baking Certificate program at St. Paul College in St. Paul, Minnesota. “I really wanted to get some professional experience to supplement and improve my work at Ingredient,” she explained. As part of the one-year program, students are required to do a 64-hour internship at a local bakery each semester to practice what they’re learning. Elsa spent her first internship at Bellecour Bakery, a classic French pastry maker in Minneapolis.

We sat down with Elsa for a quick Q&A to get some classic “intern stories” and find out how she plans to rock her new pastry skills at work!

Why did you decide to go to culinary school? What are your goals?

I came to Ingredient with a BA in biology and a background in public health and project management, so everything I do on the culinary team I’ve either learned from my peers or I’ve self-taught. I’m really interested in baking and pastry, and I especially wanted to learn nuances in baking, like how to make my baked goods lighter or have a more dense crumb. It’s basically baking science for recipe development. We also create a ton of content for Instagram and Facebook; we need someone on the team who is trained in things like piping and cake decorating to give our products that Instagram quality.

Tell us about where you’re doing your internship.

I’ve been working at Bellecour Bakery, which used to be a lakeside French restaurant in Wayzata. It recently closed because of Covid and reopened just its bakery portion in the North Loop neighborhood of Minneapolis. They moved all their bakery equipment to the teaching kitchen at Cooks of Crocus Hill; they bake in the early mornings through midday. Whenever possible during Covid, Cooks of Crocus Hill still holds their classes there at night. Bellecour specializes in French pastry — they’re known for their crêpe cakes, but they also do cookies, croissants, and other variations on croissants.

What have you learned that you’re most excited to share with home cooks?

Making croissants at home! Everyone says they’re really hard to make, but it’s not because a home cook can’t do it; it’s because it takes three days. I’ve tried to make croissants and failed for three years before working at Bellecour. My biggest takeaway is that they need to proof for 24 hours, not the three hours that most cookbook recipes say.

Overall, I’m just so impressed with the bakers that come in every day and make sure every cookie, every muffin, every croissant looks exactly the same. You have to be a machine! I have a big appreciation for that. While the precision and elbow grease needed to succeed in a commercial bakery is vastly greater than in a home bakery, the basic techniques are the same. I'm excited to be able to work across this line and bring ideas from the professional bakery to the home cook.

What was it like being in a large-scale commercial bakery versus doing smaller batches in our kitchen?

Well, actually Bellecour isn’t large-scale at all — it’s a pretty small operation. They only have three or four bakers there at a time. That’s one of the reasons I wanted to go there: to get more hands-on experience versus just observing. I knew they would need me to help!

I was so impressed to learn how much thought goes into a menu to make a bakery succeed financially. You only have so much time in the day to make so much product. You don’t take many breaks. Sometimes you skip meals. You basically work from 5 a.m. to 3 p.m. nonstop. It’s exhausting, but fun. There’s a camaraderie that you get from working and having a common challenge: fighting against time during the day.

Also, instead of focusing on one recipe and making it perfect for photos and easy for the home cook, you’re making huge batches, and you have to make sure they’re flawless, otherwise you’ll end up with a couple of cupcakes with flour in the middle. And learning how to operate a giant mixer is a different ball game!

Another thing that I found fascinating is that every byproduct is used to make something else. It takes a lot of time to mix dough and roll it out. If you make croissant dough and cut it into triangles, you’ll have leftover scraps. It’s much more cost-effective for the bakery to use those scraps instead of spending the time creating new dough. We turned those croissant scraps into things like croissant knots!

How has your science background affected your kitchen skills and your experience in culinary school?

Cooking and lab experiments are actually very similar! In both, there is a process of trial and error: you need to isolate one variable at a time to affect the final outcome. Doing lab experiments is hands-on work, and it’s the same in the kitchen: you’re operating machinery, mixers, and laminators, manipulating time and ingredients to create a final product. I’ve also written so many technical science papers, it makes me a much better recipe writer.

The fun part about cooking is that once you understand the science, you can take that knowledge and use it in different ways. That’s the creativity piece! I’ve gotta say, you also get immediate gratification making a new flavor of cake versus doing a research project.

What’s your favorite pastry? What do you love making?

Lately I’ve really been into making cookies. We’ve been working on the best chocolate chip cookie recipe for our client Gelson’s. Doing something so simple, so well, is really fun. Otherwise, in school I’m obsessed with pastry cream (like in éclairs) — it can also be used in cakes and all sorts of other stuff.

You can’t beat a good bowl scraper! It’s like a bench scraper, but it’s made of flexible plastic. It’s like an extension of your hand versus a spatula, and it helps you get everything out of the bowl.

Bellecour is known for its crêpe cakes, so on my second week they sent me over to the kitchen at Spoon and Stable to make crêpes for these cakes.

I had to take a 12-quart container of crêpe batter over to a huge commercial kitchen stove — there were six frying pans and I wore two layers of gloves, because I needed to make these crêpes by hand. Diane Yang, the Executive Pastry Chef, told me, “Come back to the bakery in two hours once you’ve used up all the crêpe batter.”

To make the crêpes, I ladled two ounces of batter into each of the six frying pans, making sure everything was at the right heat. Then, with my gloved hands I picked up the crêpes one by one in the hot pans and flipped them. Once they were done, I picked them up by hand again and put them in a stack.

It was so painful! The first time I did it, I think I burned off all my fingerprints. Diane told me, “Those are pretty good, but they’re not neat enough.” Well, they weren’t neat enough because my fingers were burning and I was throwing the crêpes into piles!

I came back two days later and Diane said, “We’re going to have you make crêpes!” I was dreading it, and this time I put on three pairs of gloves. But either I had developed calluses, or maybe it was the extra gloves, but it was easier this time. After I finished, Diane said, “These are so much better — just don’t make them as big.”

By the third time, I was just whipping through them. I wasn’t getting burned, and by the end Diane told me, “These are great. You’re the first intern to nail crêpes.” I felt so good! All in all, I had cooked 200 crêpes three times, for a total of 600 crêpes. That experience is the perfect example of what it takes to become a good chef or baker: practice makes perfect.

Want to see what Elsa’s up to in our kitchen these days? Check out Ingredient on Facebook, Instagram, and TikTok to see some of our latest creations and behind-the-scenes adventures. And if you see a gorgeous new cake or pastry on our feed, odds are that Elsa is behind it!