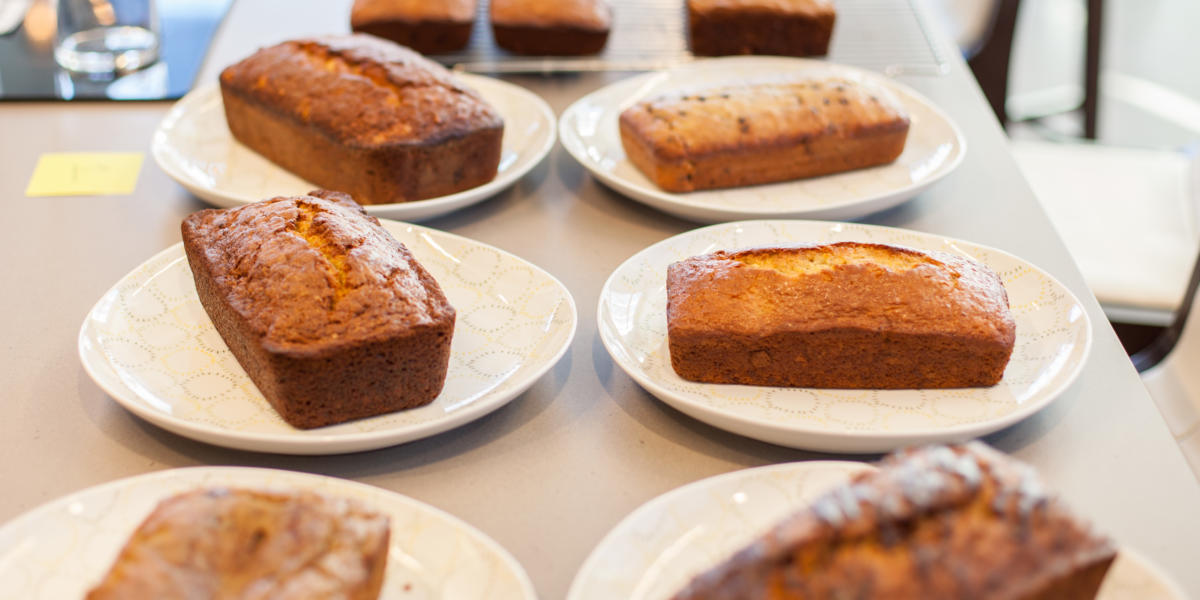 According to King Arthur Flour, the most searched-for bread recipe online isn't white sandwich bread or whole wheat bread – or any bread with yeast in it at all! Nope, the most sought-after bread recipe in America is actually…banana bread!

It all makes sense, of course. Nothing conjures up happy memories quite like the smell of banana bread baking, or the satisfying taste of a warm slice fresh from the oven. For many people, banana bread is a family tradition that's been passed on for generations.

Banana bread first became popular in the United States in the 1930s. During the Depression era, households were unwilling to throw away anything, even "rotten" bananas.

Around the same time, baking powder and baking soda became widely available for the first time, giving families the ability to bake simple "quick breads" without having to use yeast.

To say we were excited for an office-wide banana bread bake-off is an understatement. (You know we love a good competition.) The office smelled amazing! The eight competitors brought a wide variety of banana bread recipes to the table. Many were tried-and-true recipes that had been in their families for years, but several people tried brand-new recipes, putting their faith in Google's ability to beat out Grandma. One person even baked his bread right in our studio kitchen that morning (NO FAIR, warm banana bread advantage!) – prompting everyone else to wrap their breads in foil and pop them in the oven to even up the score.

What surprised us the most was that no two banana breads were alike. Some had nuts, some had chocolate chips, some were plain. One had a chocolate drizzle. One was under-baked (sorry, Steph).

After some pretty delicious taste-testing, we narrowed it down to three winners....

In third place: Kelsey's Aloha Banana Bread, inspired by her recent trip to Hawaii. It was the most unique bread we tasted, featuring pineapple and macadamia nuts baked right inside.

In second place: Marcie's Traditional Banana Bread, which had mini chocolate chips. "Because they don't sink," she explained.

And the winner: A surprise entry from Matt, the person we didn't think knew how to bake. Turns out, he does. His delicious Nutmeg Spiced Banana Bread stole the show. And for the record, it was a grandma recipe. We'd love to share it here, but the recipe is a family secret! Looking for a similar recipe? Ask YOUR grandma! (Or Google. We won't tell.)