The Rise of Independent Food Magazines 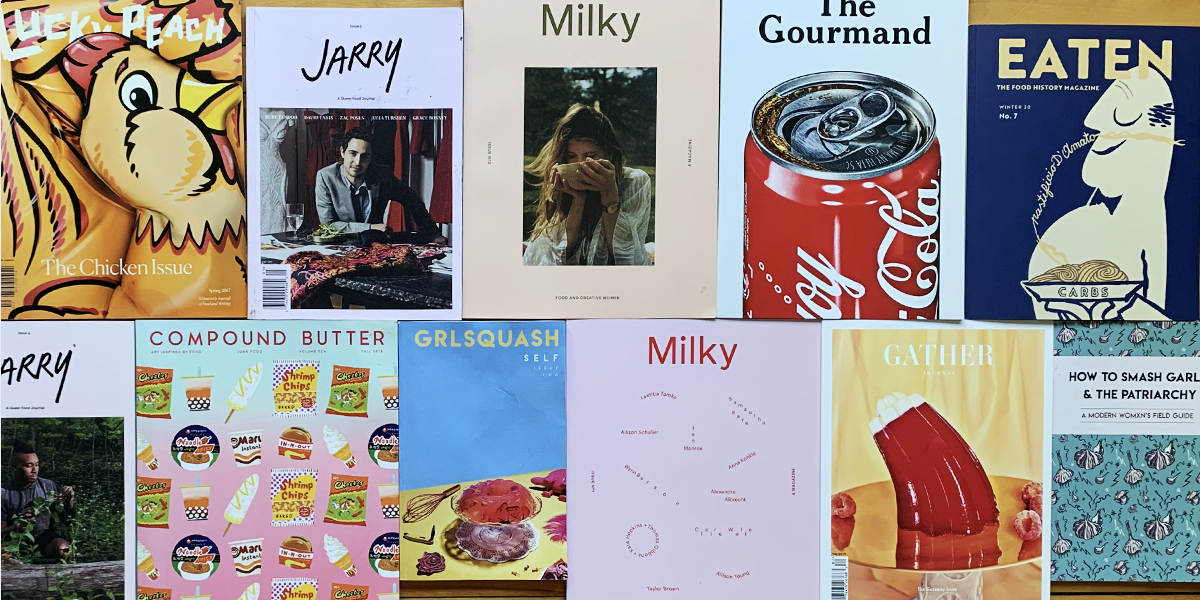 For decades, home cooks kept stacks of beautiful, high-gloss food magazines in their kitchens and on their coffee tables. From Bon Appétit to Food & Wine to Gourmet, these magazines were inspirational and just a wee bit unattainable — total #foodgoals at the time. However, they were also surprisingly one-dimensional and lacking in diversity.

Today, the food industry is changing — and so are the magazines that represent it. We chatted with our social media maven and foodie expert, Angela, to get her take on the rise of independent food magazines.

Q. How have food magazines changed?

A. For years, classic high-gloss food magazines like Bon Appétit and Gourmet were considered the "gatekeepers of food." They were from New York City, sophisticated, and what people were "supposed to look to" as a representation of what food meant at the time. They were formulaic, heteronormal, middle- to upper-class, and white. But in real life, the food industry is so much bigger than this!

With the rise of online recipes, magazines seemed to be dying out — but now we’re seeing a renaissance of independent food magazines for a new generation. All of us grew up with these beautiful magazines, and I honestly think we still long for this form of print expression, just on our terms. People are taking the matter into their own hands. This isn't just for rich old white guys anymore. Today's food magazines are less pristine and more authentic — and we're seeing them everywhere.

Q. Why do you think we’re seeing these changes?

A. Some of it has to do with the rise of millennials and how they approach food. As technology booms and the world becomes much more interconnected, this generation wants to broaden their horizons — and wants to know where their food comes from.

However, it's also about celebrating the entirety of the food industry and ensuring that anyone who wants a seat at the table has one. Today's independent magazines are an opportunity for people across the food spectrum to express their true creative identity. From women in food to queer culinary culture and beyond, there are so many perspectives and experiences once considered "fringe" that are finally getting their chance in the spotlight.

Food is a part of everyone’s lives, everywhere, and there are so many fascinating, wonderful ways to share it. Why not show what it's like in the real world, versus some outdated, colonialized version?

Q. When did this movement begin?

A. This new genre really started to break through in 2011 with a magazine called Lucky Peach, the brainchild of two veteran editors, Chris Ying and Peter Meehan, along with David Chang, the chef behind the Momofuku restaurants in New York. Published initially under the McSweeney's umbrella, it upended the standard of glossy, airbrushed food magazines. Each issue went into depth about a single topic and explored the edges of culinary culture. It was irreverent, literary, and filled with art and illustration. It was also incredibly successful, winning numerous awards, including a James Beard award.

Q. Which are your favorites? Which ones do you recommend?

A. Today there are so many different magazines to choose from — I have a pile at my desk right now. A couple of my current favorites are Meal Magazine and Make MN, two local magazines that are definitely worth checking out.

I've recently become obsessed with Eaten Mag — a food history magazine that gives you so much more than you’d expect. I’m also loving Jarry Mag, a food journal about how the history of queer identity gave way to queer food culture and a way to nourish our community.

And finally, I'm really looking forward to For the Culture, a magazine celebrating black women in food and wine, set into motion by Klancy E Miller. We should all go support them on Patreon!

If you’re interested in finding out more about independent food magazines, reach out to independent bookstores or kitchen stores. In Minneapolis we love places like Flotsam and Fork, The Foundry Home Goods, and Birchbark Books. Or, keep tabs on the next Food Book Fair in New York, where a lot of discovery happens — I highly recommend following them on social media.

Q. Do you think this trend is here to stay?

A. I absolutely think we will see this trend continue. It's not a money maker, but it is a passion project — and it's a way to share your voice that isn't the internet, which can sometimes feel like shouting into the void. Taking something from digital to print always feels sort of magical to me, and that's definitely what these magazines have become.